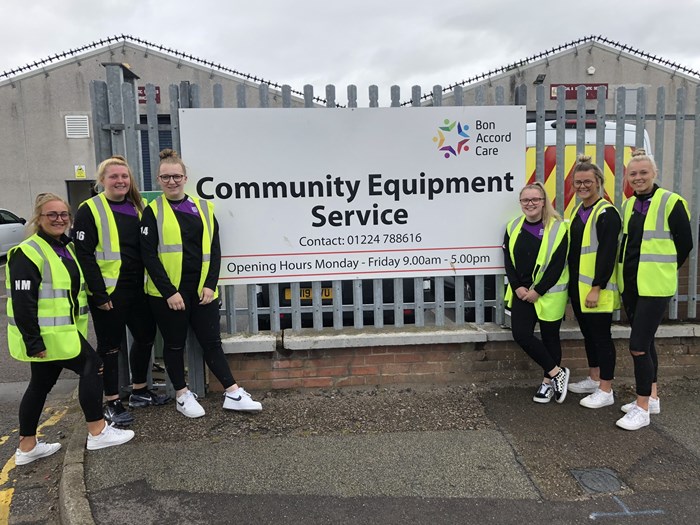 Robert Gordon University Women’s football team found a fun way to keep fit during lockdown, and we use the word fun with just a hint of misrepresentation, as we can only imagine how tough it must have been.

The plan was to keep their fitness up and raise money for Bon Accord Care at the same time, so, for four weeks the women endeavoured to go further and further each time by walking, running and cycling.

They set targets each week involving a steady increase each time.  The first week they hoped to hit the 400km mark and smashed it by managing 550km.  The second week they only just sneaked past the 600km target by a single kilometre.  The third and fourth weeks they hit their targets of 650km and 700km easily, surpassing both by a total of more than 50km.

Claire Forrester, who helped organise the event, explained that they’d noticed some of their rivals were finding unique ways to keep fit and knew they’d be left behind if they didn’t start their own regime.  “We felt that it was important we put our own fitness to the test during lockdown to keep the ‘team morale’ high and ensure everyone was keeping fit at the same time. At first, we set what we thought was a rather ambitious target for week 1, however, due to the enthusiasm and hardworking attitude of our girls, we smashed it”.

Week four proved toughest with the women trying to balance jobs, placements and family life while having a massive 700km target to hit.  In the end they managed with lots to spare and they all felt the experience was genuinely rewarding.  They’d improved their fitness, bonded as a team and managed to raise more than they’d hoped.

One of our colleagues at Bon Accord Care, Laura Parsley, has played for the team for the past couple of seasons, scoring lots of important goals and even coaching the team whilst recovering from an injury that kept her from playing for most of last season.  It was Laura’s passion for her job and teammates at work that convinced the women that their fundraising efforts should benefit the staff and people they support.

“As a club, we believed this donation was thoroughly deserved, and showed our appreciation for the great work accomplished daily by Bon Accord Care.” Claire explained.

We all enjoyed reading about your progress and are incredibly grateful that you chose to donate the proceeds to Bon Accord Care.