A Londoner, who retired to the north-east after a lifetime of service in the RAF, has reached his centenary.

Flt Lieutenant George Harvey joined the RAF as an 18 year old in 1939, when the country went to war with Germany.

On Wednesday, he celebrated his 100th birthday, from his care home in Torry, Aberdeen.

Born in London in 1922, George signed up when war was declared, joining the RAF as soon as he could. He started his training and soon qualified as a pilot.

During the war, George flew the famous wooden framed De Havilland Mosquito, the fastest aeroplane of its time. He also flew the Meteor jet and Bristol Beaufighter strike aircraft in his thirty eight year career in the RAF.

George said that flying the Mosquito was by far his favourite.

In addition, he was also a reserve pilot for the elite Red Arrows.

For his 95th birthday, George was taken up in a plane by Moray Flying Club for a trip through his old stomping ground. He says he misses flying and that one last trip was fun.

Bon Accord Care staff at George’s care home, Balnagask House, put together a party to celebrate the centenary with his family and friends.

Lord-Lieutenant, Lord Provost Barney Crockett, visited him to help him celebrate and to deliver a card from HM Queen Elizabeth II.

“It was an honour to meet Flight Lieutenant Harvey. He has had a full and interesting life and it was fascinating to learn about his war experiences.” 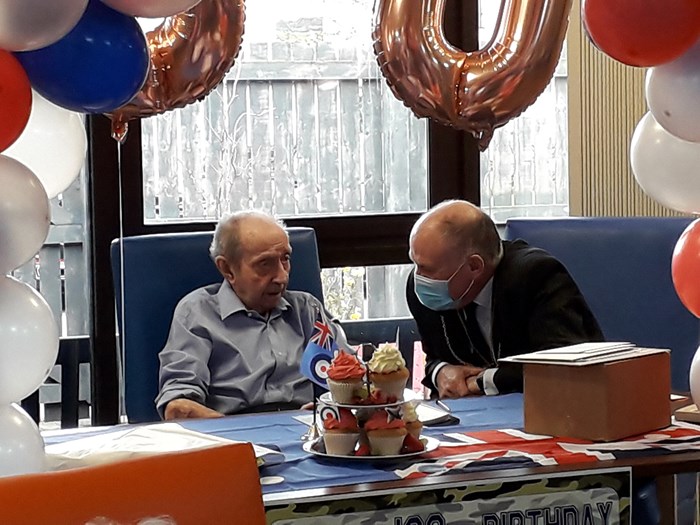